Business Jargon that Makes You Sound Like a Dickhead

Business Jargon that Makes You Sound Like a Dickhead 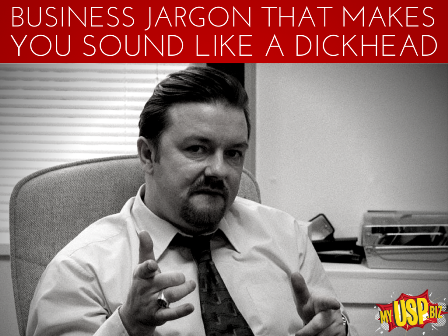 There’s English, and then there’s business English—that jumble of jargon and overly complicated words that serve no purpose other than to confuse your corporate minions and annoy the hell out of the rest of us.

Maybe these words are only picked up by individuals looking for a tow, a step-up or a hand in reaching ‘executive status’. If you ask me it just underlines a lack of originality in one’s own expression. Personally, I’d be embarrassed to be seen as someone who spoke like this, so why don’t others?

Today’s action item is to dialogue about jargon that has gained traction in the business world. In other words, here’s a list of business terms and phrases to avoid with ideas for what you can say instead. Your staff and clients will thank you for it…so will I.

gain traction: We need this project to gain traction in the company.
REWRITE: We need to show the importance of this project.
UUURRRGH! This one is highly irritating to me. Why do people latch onto this stuff?

productise: Let’s productise this idea.
REWRITE: Let’s find a way to make this idea into a product.
I’ve been guilty of this a few times in the past month [shame]

reach out: I want to reach out to you to….
REWRITE: I’d like to ask you.

Do you have other entries? Please share your irksome business jargon in the comments section. I’d love you to keep me ‘in the loop’ [another stupid phrase]. tim@myusp.biz

And finally, I’d like to make it known that using the feature image of David Brent [Ricky Gervais] doesn’t mean I think that character is a dickhead. Far from it. I’ve laughed at and watched The Office so many times I’ve lost count. It’s utterly brilliant.